Lesson in Artistic Worth | Cynthia Hopkins' A Living Documentary

I push pass revolving glass doors--greeted by the smell of beer hops and the sound of karaoke. The vibe is chill, celebratory, and accessible. Less stuffy than the typical pre-show lobby composition, I anticipate a thought-provoking evening.
Have you ever been over it, pissed off, exacerbated, ignited, defeated, or invigorated with such tenacity that it propels you to write feverishly in a journal, scribble notes across a measure, fill unoccupied space with movement, or re-imagine a blank canvas?
Cynthia Hopkins’ A Living Documentary is a response to just that—part musical, part monologue.
She is described as a brutally honest artist, boldly confronting issues of circumstance, family, career, money, taxes, and addiction in a “witty, bracing, self-effacing and ultimately, humorous manner, successfully steering way from getting mired in pathos (Ivan Talijancic).”
For any artist familiar with trying to make a living from their art, this work connects a familiar dialogue across race, gender, and generation. We’ve been there. We have done or are doing that. We can all nod with familiarity to a thing or two in this work.
And it comes at a time when I could use a reminder. As an artist, it’s not uncommon to question your worth or have it questioned for you. It’s not uncommon to forgone monetary compensation in light of networking opportunities and exposure, but then what…
Transformation
A Living Documentaryintertwines fact with fiction as autobiographical tales collide with fantasy by way of episodic characters and melodic tunes.
Hopkins’ first character is an old man. Nostalgic and reminiscent, he recalls the journey of his imagination leading him to this moment. A cane occupies one hand and a wrinkled tissue showing signs of use occupies the other. A classic tape recorder rests in the worn upholstered chair next to him. I can almost smell mothballs.
His voice quivers with the tune “I’m alive, I’m aging fine,” and it echos in my mind with the reality of an upcoming birthday.
--------------

Hopkins transforms from one character to the next under soft, indigo lights. Each character melts away from her breathing body to create lifeless piles on the floor.
Under our gaze, she sets and re-sets each scene matter-of-factly. She walks around the active stage pensive and confident—comfortable in her skin and the space.
A single, amber bulb hangs overhead, cascading light on a table full of contents below. Costumes, make-up, water, tissue, wigs, mannequin heads.
Let's burst into song (for no reason) 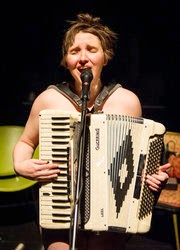 Hopkins channels the ridiculousness of musicals, while reminding me (and others) why we still love them anyway.
From a high-pitched, off key older woman, to a stripped serenading songstress, melodic tunes are accompanied by a classic tape recorder.
During one character interlude, the voice over informs us that she (Hopkins) inherited a large sum of money. She didn’t want it, so she carelessly blew it on elaborate theater productions, followed by exorbitant credit card debt.
I wrestled with many considerations of this tale. I found myself tasked to consider my compassion for privilege, which unsurprisingly was minimal. I couldn't see myself saying, "Oh, you inherited a lot of money, poor thing :(," but it's all about perspective. Unrequested for monetary support—blessing or curse?
My Character has many names
The work begins and ends with older characters. Their bodies and posture reveal the consequences of their life decisions.
My favorite character was the 1970s, self-help secretary. I will call her Florence. She encouraged us to “fail, fail again, fail better.”
When was the last time you followed an illogical impulse? 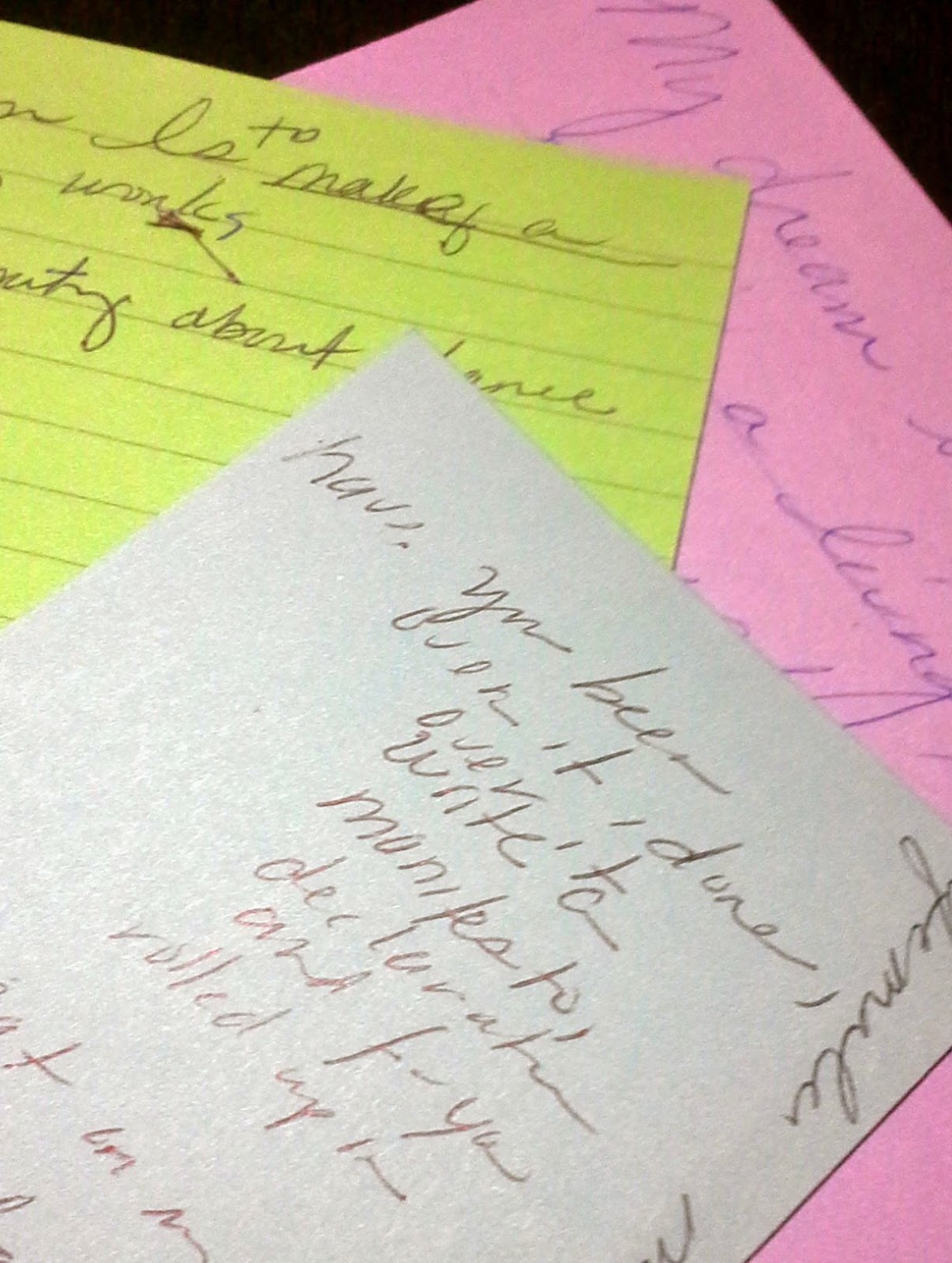 Flo encouraged us to write down our dream on pastel-colored index cards. Collectively we shouted them out, blending a diverse concoction of voices and responses.
“Don’t be afraid to take risks,” Flo said. Claim your dreams. We get what we ask for and make excuses for what we are too afraid to ask for.
Another memorable character appeared at the climax of the work. Accompanied by either guitar or accordion, Hopkins endured the brave costume choice of simply skin. As a consequence of being naked, she seemed vulnerable and exposed, yet she was also strong and absolutely enchanting in her song.
Still Brewing
A Living Documentaryshifts through the whirling tale of a female musical performing artist in the 21st century. Hopkins reveals that this work is a metaphor for freedom—cathartic in many ways.
How far are you willing to push your body and mind for your work and artistic craft?
Hopkins parades around in her low budget, sustainable one-woman show at New York Live Arts, but she doesn’t excuse the audience or herself from the consequences of this decision.
What does it mean to exclude other artists (musicians, actors, and production crews) who could potentially gain income from a less sustainable, larger production?
What is the consequence of charging $30 seats?
What does it mean to pay collaborators at the expense of not paying yourself? Denying yourself a living wage?
Hopkins says she’s been there/done that with the credit card debt to prove it. A Living Documentary was a declaration of no more.
I walked away thinking...Be confident. Know your worth. Don’t be afraid to bypass a polite request, in exchange for the rightful demand of fair compensation and acknowledgement of your artistic worth.
----------------------------------------------------
Don't forget to subscribe!